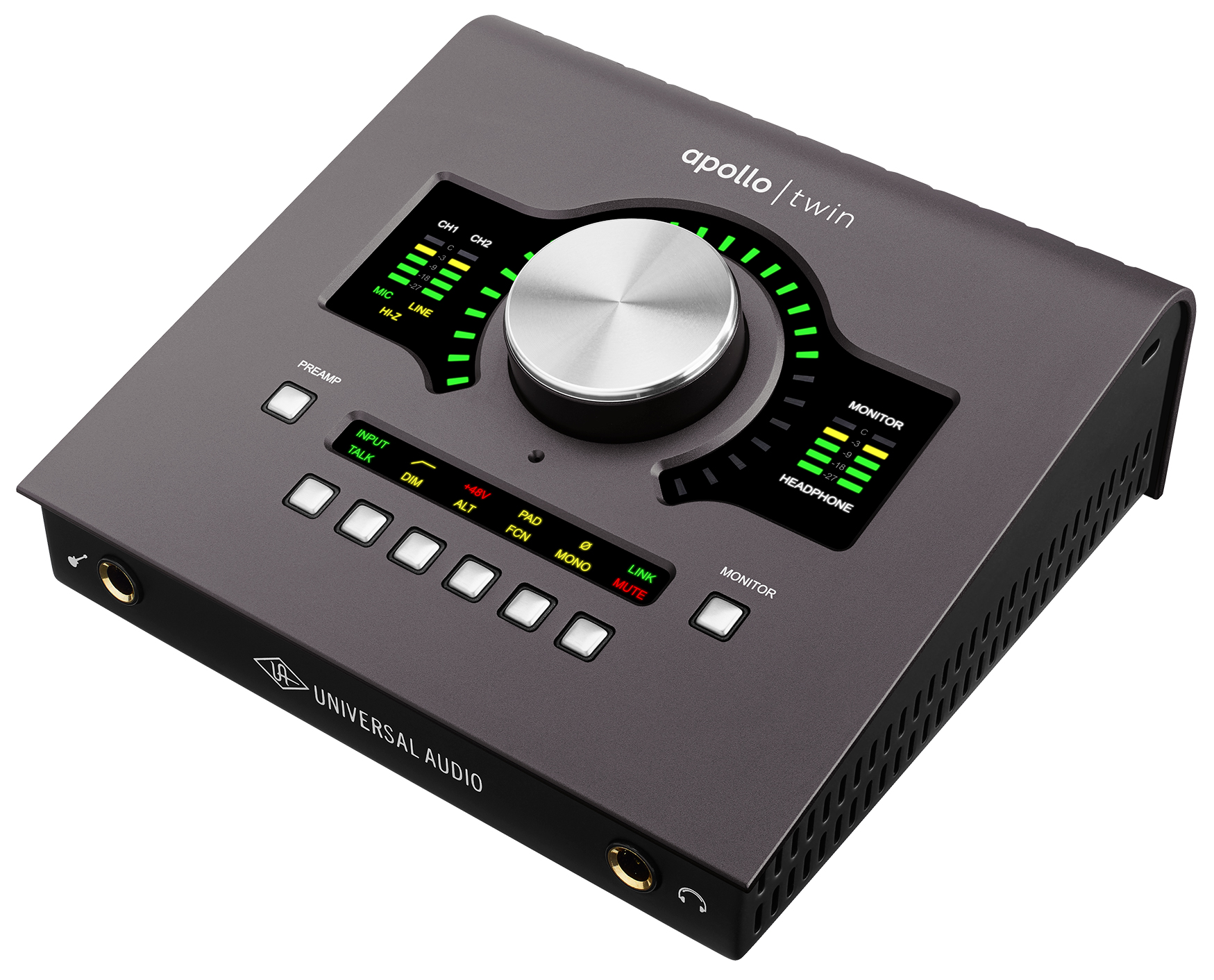 Apollo Twin MkII is a ground-up redesign of the world’s most popular professional desktop recording interface for Mac and Windows — delivering enhanced audio conversion with the tone, feel, and flow of analog recording.

Built upon UA’s 60-year heritage of audio craftsmanship, Apollo Twin MkII starts with two Unison™-enabled mic preamps and the same next-generation A/D and D/A conversion found on UA’s flagship Apollo 8, 8p and 16. Together with its included bundle of UAD analog emulation plug-ins — which you can track through in real time with UAD-2 SOLO Core processing — Apollo Twin MkII is born to make records.

An Apollo exclusive, Unison technology nails the tone of these sought-after tube and solid state mic pres — including their input impedance, gain stage “sweet spots,” and the component-level circuit behaviors of the original hardware.

The secret to Unison is its hardware-software integration between Apollo’s mic preamps and its onboard UAD-2 SOLO Core DSP Acceleration. Simply place a Unison preamp plug-in on your mic input, and tap into the classic sounds of the world’s most recorded mic preamps.

A Full Suite of Classic Analog Processing Onboard

Right out of the box, Apollo Twin MkII provides a suite of incredible analog emulation plug-ins including the world’s only authentic Teletronix LA-2A, 1176LN, Pultec EQs, and the Unison-enabled UA 610-B Tube Preamp. Developed by UA’s world-renowned team of algorithm engineers, these Realtime Analog Classic plug-ins set the standard by which all other hardware emulation plug-ins are judged.

From the tube warmth of the Pultec EQ on guitars, to the gentle limiting of the LA-2A on vocals, your recordings will take a giant leap forward in rich, sonically complex analog sound.

With exclusive emulations from Neve, Studer, Manley, API, Ampex, Lexicon, Fender, and more,† it’s like having an endless analog studio, right on your desktop. And unlike competing interfaces, these DSP-powered plug-ins are also available in your DAW for mixing.

Of course, the heart of any audio interface is the quality of its conversion. Apollo Twin MkII improves upon the original Apollo Twin’s gold-standard audio quality with completely redesigned A/D and D/A conversion — giving you increased dynamic range and ultra-low THD. This next-generation conversion results in breathtaking clarity, depth, and accuracy in your recordings.

Apollo: The Choice of New-School Professionals

Apollo is the confirmed choice of hit-making professionals, used to record records by Kendrick Lamar (To Pimp A Butterfly), Coldplay (A Head Full of Dreams), Dr. Dre (Compton), Brad Paisley (Wheelhouse), and many more. The Apollo range of interfaces has earned numerous industry awards from Sound on Sound, Future Music and Electronic Musician — as well as the prestigious 2016 TEC Award for computer audio hardware.